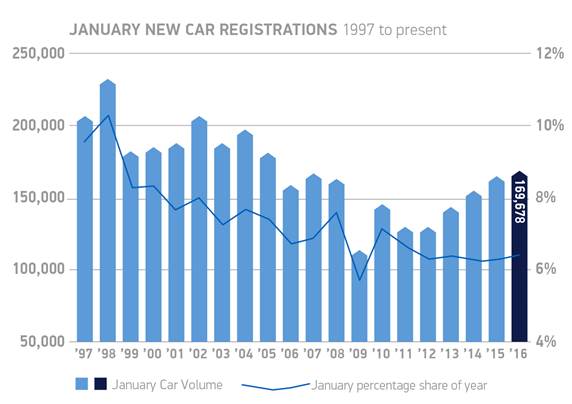 While overall registrations were an 11 year high, sales to private buyers were an even more impressive 12 year high

Private and business buyers drove this growth with demand for new cars up by 8.2 per cent to 73,061 and 5.0 per cent to 6,716 units respectively, while the fleet sector declined slightly by 1.1 per cent to 89,901. The month marks the highest number of new cars registered to private buyers in January in 12 years.

Meanwhile Steve Jackson, chief car editor at Glass’s, said: “Consumer demand has broadly driven the increase with a number of new models available. This, combined with low interest rates and creative finance campaigns with PCP, have helped drive this record number. Fleet however has slipped slightly by 1.1 per cent on the same period last year…Glass’s continue to watch the market closely, forecasting a 3 per cent growth, and have also witnessed larger numbers of used vehicles in the wholesale market from dealers and captive finance companies as well as fleet vendors compared to the same period 2015.”

“It is extremely positive to see that the car market in January has continued its upward trend – making it the best month for new car registrations since 2005”, said Sue Robinson, director of the National Franchised Dealers Association (NFDA), adding: “Consumer confidence continued to grow as the economy becomes more robust, and retail customers feel secure enough to commit to buying cars. This is helped by the competitive offers made available by the manufacturer and a more disposable income due to higher levels of employment.”