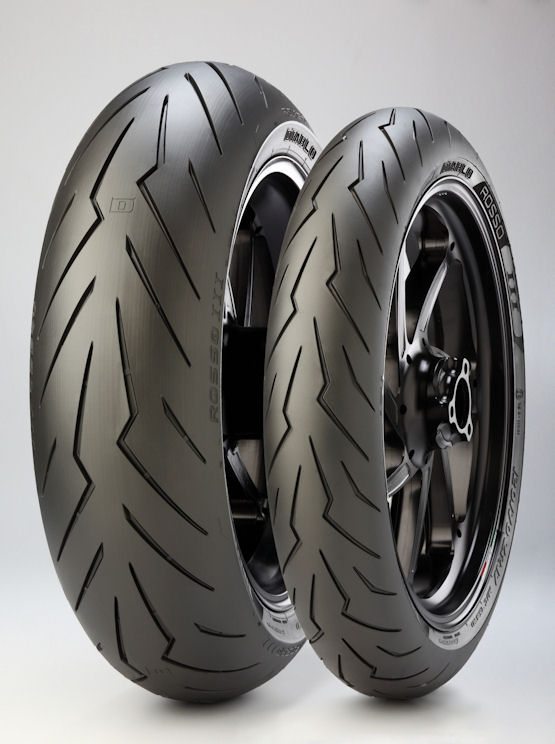 Last October, Pirelli announced the launch of its third generation Diablo Rosso supersport tyre. The Diablo Rosso III range has now been released in the UK in time for the 2016 riding season, and Pirelli Moto UK says it will extensively market these tyres through its sponsorship of the MCE British Superbike Championship.

Pirelli reports that the Diablo Rosso III’s development owes much to the tyre maker’s involvement in the treaded classes (Supersport and Superstock) of the World Superbike championship. The developmental focus was upon high performance and a ‘safe feeling’ in both wet and dry conditions. According to Pirelli, mileage levels achieved with the Diablo Rosso III will also “provide the new reference point for the supersport tyre segment,” with consistent wear through the whole of the tyre’s life.

The front tyre’s profile design provides a larger contact area than the previous generation, particularly at high angles of lean

Thanks to an exclusive and patented mixing process, Pirelli has developed compounds with a high percentage of silica combined with latest generation oils, resins and polymers, and also managed to improve the cohesion of the elements. The end result is “an unprecedented level of uniformity.” Grip and durability are addressed in the twin-compound rear tyre through a 40-20-40 configuration, with the side areas focusing on grip and the 20 per cent centre area built for durability and high speed stability. The front tyre is a single, 100 per cent silica compound and is said to offer outstanding feedback and best in class stability. Pirelli says it decided not to use a dual-compound solution at the front as a combination of study results and its own engineers’ experience suggest that a single-compound solution is the best choice, as it is the only one capable of offering motorcyclists good quality feedback together with a high level of stability.

In general, the main function of the tyre’s profile is to influence handling. In the case of the Diablo Rosso III, much has been inherited from Pirelli’s experience in World Superbike: its profiles are derived directly from those of the Diablo Supercorsa, a tyre used in the Supersport and Superstock classes, albeit adapted for road use.

The front tyre’s profile is higher in the middle and wider at the sides than that of the previous-generation Diablo Rosso II; this design provides a larger contact area, particularly at high angles of lean. At the same time the height of the sidewall has been increased by about 3 millimetres to favour greater sidewall flexibility in acceleration out of bends, with a great benefit in terms of traction. A similar scheme and geometry has been adopted for the rear tyre.

The Diablo Rosso III is built upon a completely revised radial casing that makes the tyre more rigid than its predecessor and more similar in structure to the Supercorsa. The revised design aims to sustain the tyre’s profile and enable the compound to grip the asphalt better. Produced from a high-performance Rayon capable of conserving its shape even in the event of high stress generated by the forces of acceleration and load. The density of the belt has also been adjusted to balance rigidity with the absorption properties of the roughness of asphalt, providing a better feeling of contact and reliability.

The Diablo Rosso III is aimed at “sporting aspired” road riders who may venture onto the occasional track day. It is now available in the following sizes: