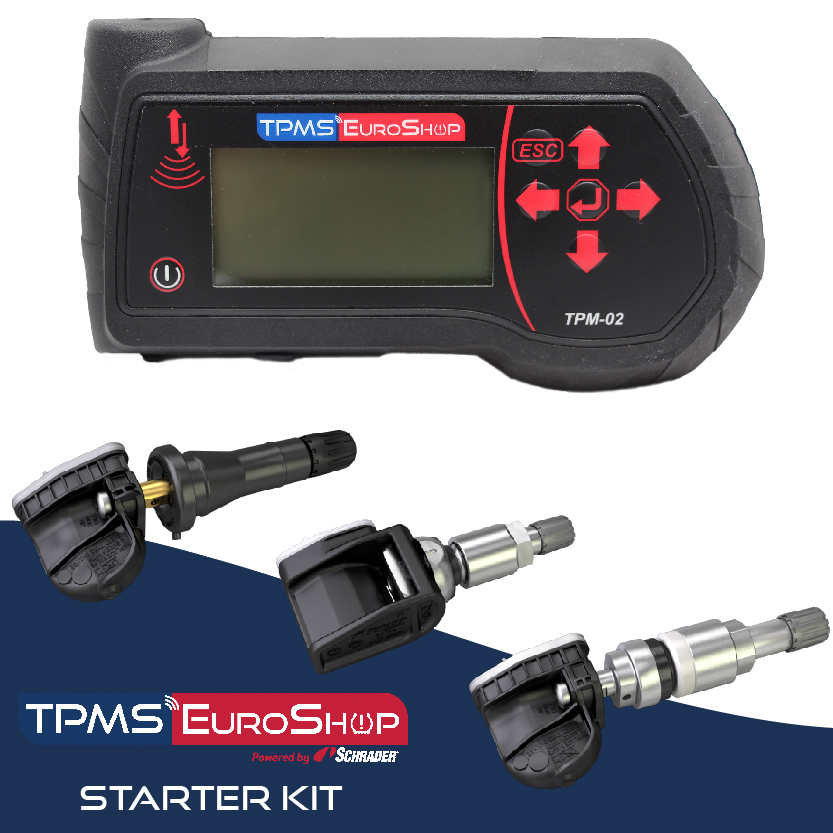 The Starter Kit has been developed to facilitate customers in taking the first step into the world of TPMS, including everything required to start their activity. Beside the introduction process, it is also an opportunity for advanced TPMS workshops to get in touch with high quality Schrader products.

According to Schrader, the TPMSEuroshop starter kit enables customers to get into the TPMS servicing faster thanks to an “Easy to use” programming tool and all the necessary sensors to start. The TPMSEuroshop tool supports all programmable Schrader sensors like the EZ-sensor 2.0.

With a software upgrade it also has the capability to program other universal sensors on the market. And with its transflective LCD-display it is user friendly in all light conditions and the lithium battery life is up to one week (30 vehicles tested per day).

Schrader reports that the EZ-sensor 2.0 has leading coverage and OE performance in the market, able to cover 100 per cent of the total European vehicle car park (using direct TPMS technology) and supports all OE functionalities including auto-localisation and pressure by position in-car display.

At the same time, Schrader also released a new part number. Part Number 3057 is a Schrader Clamp-in Gen Delta 433MHz for Daimler/BMW fitments. According to the company, the sensor is compatible with several BMW, Mercedes and Rolls Royce models as listed below. Our part number will be 3057 and replaces the OE part numbers listed. As per the OE sensor the 3057 is the variable angle clamp-in gen delta type.

For Schrader, the strategy behind coverage is electronics hardware that is capable of matching all OE functionality, and with the release of each new software update (application code) coverage increases incrementally. This allows the comapny to be able cover 100 per cent of the vehicles on the road, and to be ready for new vehicles entering the market.

By the end of 2015, Schrader will be able to cover 93 per cent of new cars registered in the European winter area in 2015 which are fitted with direct TPMS technology. Unlike other aftermarket sensor players, coverage in Schrader’s vocabulary equates to 100 per cent application of OE specification requirement, and hence EZ-sensor is guaranteed functionality free of performance downgrades and other issues. Schrader reports that its coverage definition is therefore the widest on the market.

“When our costumer uses a programming tool to diagnose or program the EZ-sensor, it is really important to verify if the software has been updated with the latest database release provided by the tool manufacturer. The more up to date the database is, the better car coverage is provided. All updates are available on the tool manufacturers’ websites and their relative car coverage list can also be downloaded to verify coverage by EZ-sensor 2.0”, company representatives said in a statement on the subject. Further coverage information is available at www.tpmseuroshop.com.

Schrader’s TPMSEuroshop was first released in May 2014. Since that time, the website is said to have been an “important success” with customers and partners. Customers can use it as a webshop to order sensors or different parts but it is also the reference point for TPMS information.

At the release, the website was available in German, English, French and Italian languages. TPMSEuroshop versions are now managed by partners in the UK, Spain, France, Germany, Italy, Poland and the Czech Republic. Of course the website can be accessed from all around the world. But products bought on TPMSEuroshop can only be delivered in Europe.