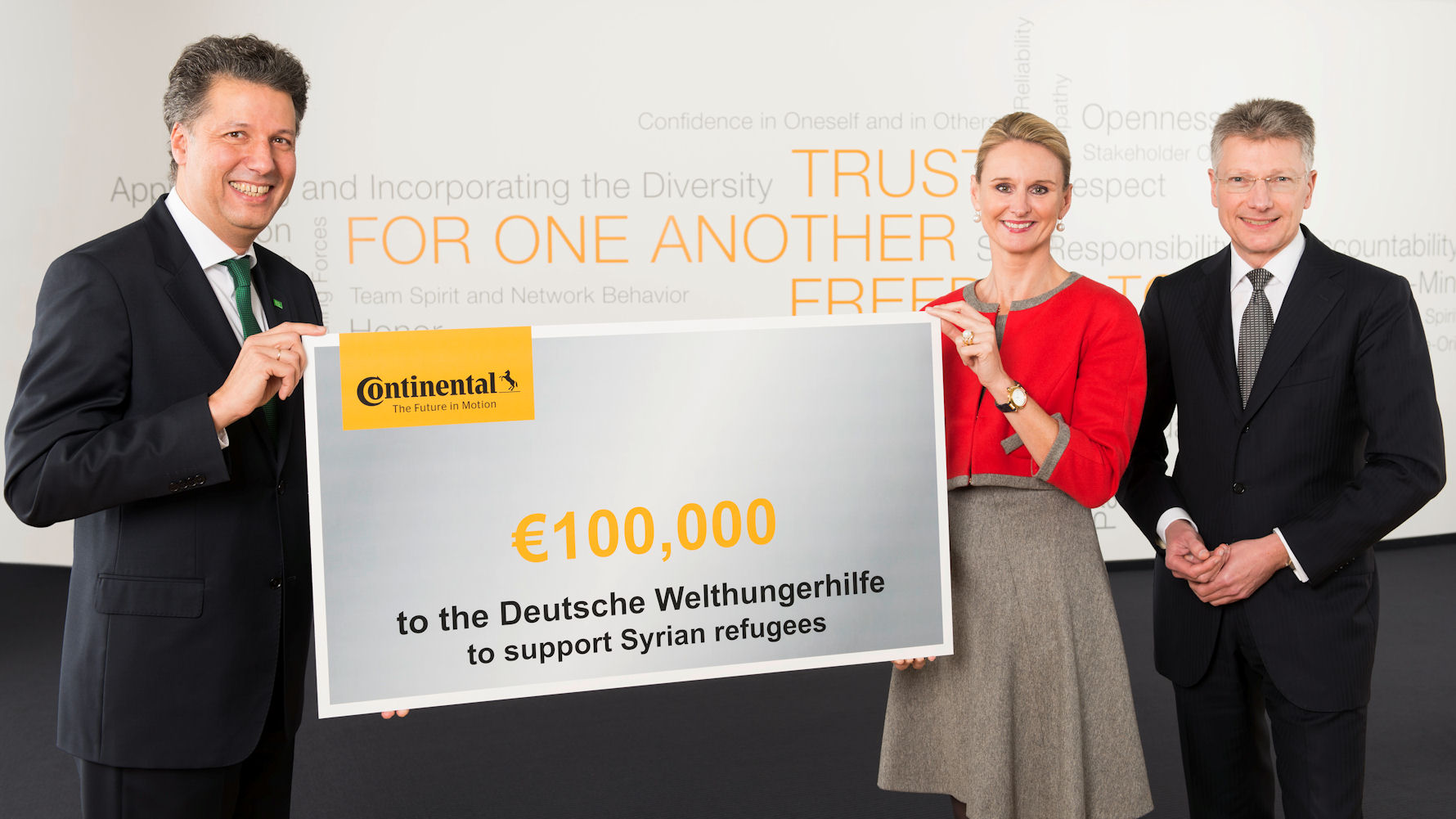 Tyre and automotive systems manufacturer Continental has donated €100,000 to German non-governmental aid agency Welthungerhilfe in order to support Syrian refugees now living in camps in the Middle East and Turkey. Continental shares that this donation complements activities its employees have carried out at several Continental locations.

“Through no fault of their own, the people in the many refugee camps in the Middle East and Turkey are suffering the most from the conflicts in their home countries,” said Dr Elmar Degenhart, chairman of the Continental Executive Board. “As winter approaches, they need our immediate assistance. With our donation, we want to make a contribution especially to improve the schooling of the children there, which has been inadequate for way too long. Welthungerhilfe and its partners carry out excellent work on site, which they will be able to continue with our support.”

“We are delighted with this generous donation from Continental AG,” added Welthungerhilfe secretary general Dr Till Wahnbaeck. “The many thousands of Syrian children who have been holding out in Turkey with their families for more than four years urgently need our support. To make sure they do not grow up to become a lost generation, above all we need to provide schooling as well. There is often a lack of buses to the nearest school or money for the fares. Attending school will allow these children, some of whom are severely traumatised, to experience a bit of ordinary daily life again and gain hope for the future.”

Welthungerhilfe has been providing humanitarian aid for Syrian civil war victims since November 2012. This was initially done only within Syria, but in view of the increasing flow of refugees into Turkey and northern Iraq, Welthungerhilfe has begun taking action in these countries as well. Work to support civil war victims and displaced persons in the region has been coordinated from the aid agency’s Turkish office in Gaziantep since the summer of 2014. Further information can be found on the Welthungerhilfe website.

In addition to the company’s own donation, Degenhart adds that many within the Continental ranks have also actively helped refugees and asylum seekers. “We know that employees at many Continental locations have started their own campaigns to support the refugees both here in Germany and on site,” he shares. “In doing so, they are putting our corporate value ‘For One Another’ into practice in an exemplary way. The employees and the company itself believe in bearing social and societal responsibility and maintain special links with individuals and organisations dedicated to helping people in need.

Closer to home, Degenhart reports on a new Continental initiative: “Besides the action being taken by our employees and our donation for urgent aid on site, we are also working with the German Federal Employment Agency (Bundesagentur für Arbeit) on a coordinated programme to enable refugees to enter the labour market.”