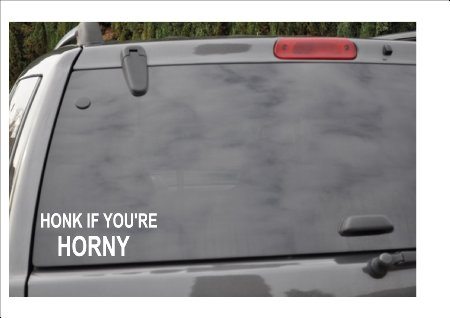 The survey suggests that 6 in 10 drivers are tempted to honk for another reason...

A thick skin isn’t necessary for driving in the UK, but it certainly helps. A survey of 2,200 drivers performed for Continental Tyres shows that more than a third permit their assumptions to influence them behind the wheel, while some 45 per cent allow prejudices to affect how courteous or aggressively they act towards other road users – with something as simple as a bumper sticker prompting them to see red.

“It is alarming that 34 per cent of drivers will change their driving style based on a prejudice about something as unimportant as how clean a vehicle is,” commented Continental Tyres spokesman Mark Griffiths.

Six in ten survey respondents confessed to a feeling of agitation when confronted by a bumper sticker for a rival sporting team or in support of certain causes or organisations. And don’t get them started about hybrid or electric cars – while one in three respondents agreed with the environmental thoughtfulness shown by drivers of these cars, an equal number described them as ‘tree-huggers’ or ‘self-righteous’.

A sizable minority of us are guilty of ‘carism’, with 27 per cent of those surveyed confirming they make an effort to be courteous to people in the same make and model of car as them. But woe betide drivers of performance or upmarket vehicles should they find themselves trying to exit a side road during peak periods – according to the survey, the likelihood of us not letting someone into the traffic at a junction doubles if they’re in a flash car. We’re even less likely to let someone in ahead of us if they’re using their mobile phone behind the wheel.

“We might form opinions of people based on issues like appearance, though for that to lead to more aggressive driving is dangerous. We think road users must be courteous to others at all times,” observed Griffiths. “Rather than aesthetic and other non-risk affecting features, the importance should be placed on factors like driving behaviour, car safety and tyre condition – as these are the things that really impact on safety.”

The good news is that the prejudices of others don’t bother most drivers. While over half of all drivers surveyed said they expect to be stereotyped, only one in seven admitted it would affect their choice of car.

Pro-Align team to ride bike ride in aid of Macmillan