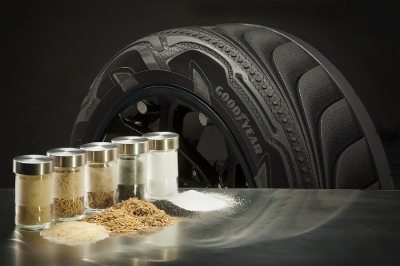 Global rice paddy production amounts to around 700 million tonnes each year, and some 20 per cent of this total paddy weight is made up of rice husk, which is separated in the rice milling process and has traditionally been discarded by burning (including to generate electricity) or by dumping in landfill. But in recent times new uses have been found for this former waste. Goodyear Tire & Rubber, for example, has tested silica derived from rice husk ash over the past two years. The tyre maker has now reached a supply agreement with China’s Yihai Food and Oil Industry for silica derived from rice husk ash, and will begin manufacturing a tyre containing this silica at its Pulandian factory in China this year. The tyre will be sold in the Chinese domestic market.

Silica is used as a reinforcing agent in tyre tread compounds and is favoured over traditional alternative carbon black due to its facilitation of lower rolling resistance. While a technique for creating silica out of rice husk ash has existed for a few years now, only the most recent processes have resulted in silica of a high enough grade to use in tyres. Goodyear says the results of testing carried out on rice husk ash silica at its Innovation Center in Akron (Ohio, USA) show the substance’s impact on tyre performance to equal traditional sources.

In addition to the agreement with Yihai, Goodyear states that it is negotiating agreements with additional suppliers. The tyre maker does not intend to release financial details of the agreements.