You are here: Home1 / News2 / Product News3 / EU CV registrations rise 6 per cent in May

EU CV registrations rise 6 per cent in May 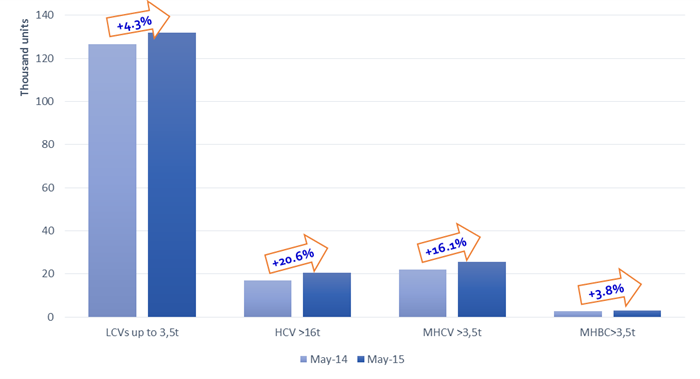 Robinson continued: “So far this year UK commercial vehicle registrations have increased by 22.6 per cent. This is higher than the EU figure of 11.6 per cent. All major markets except France showed growth, although the decline in France was slight at 1.0 per cent.

“Light commercial vehicles represented the majority of sales, and May saw the twenty-first consecutive month of growth in this sector. However, new heavy truck registrations had the largest growth in the EU at 20.6 per cent. Spain saw a staggering increase in registrations of 92 per cent, mostly thanks to a government programme. The UK experienced the second highest growth in this sector at 37.8 per cent, largely thanks to rising economic confidence that has fuelled increased demand for heavy trucks in the distribution and construction sectors. So far this year the EU market has grown 17.8 per cent. The UK outperformed fellow EU members, despite Spain’s impressive May surge, with registrations here increasing by 62.6 per cent.

“New Medium and Heavy Commercial Vehicle registrations rose 16.1 per cent in the EU compared to May of last year. Again, Spain was in pole position, with the UK experiencing a more modest 35.9 per cent increase that still secures second position in the EU. Germany suffered a decline of 6.8 per cent.

“The NFDA and our members are confident that both the UK and EU commercial vehicle markets will continue to grow for the remainder of 2015.”