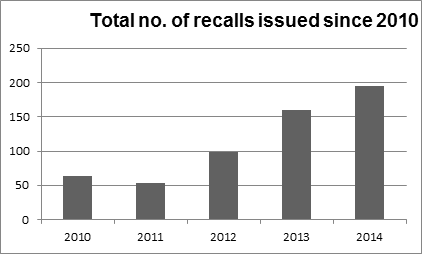 Recalls of motor vehicles models posing a serious safety risk are at their highest since 2010, according to an analysis by international law firm Pinsent Masons.

Research conducted by the firm found that in 2014, 195 recalls for motor vehicle models were issued, more than at any point in the last five years.

Pinsent Masons says the increase demonstrates the increasing pressure on manufacturers to be proactive about dealing with vehicle problems, motivated by recent events in the US. Honda’s record $70m fine for inadequate reporting of fatalities, injuries and warranty claims has been one of a number of recent high profile cases which has left automakers sensitive to the reality that regulators are taking a stronger approach to enforcing penalties.

The increase is most pronounced in Germany, where 90 cases of unsafe vehicle models were identified by the region – up from just 3 in 2010. Indeed the German experience looks like a step change in the approach taken by the major German manufacturers, distributors and authorities. Just 27 notifications for vehicle recalls were identified by the UK last year.

The firm says that manufacturers will be working harder to mitigate the volume of product recalls in 2015, but that the increasing complexity of modern cars may create different challenges.

“Manufacturing and selling motor vehicles suffering from safety defects can have extensive reputational, financial and legal implications for automakers and their suppliers. Honda is a prime example; it’s faced questioning for over 1,700 unreported death and injury claims and recalled more than 5 million vehicles in the US since 2008 as a result of faulty air bags made by Takata” says Andrew Masterson, Partner at Pinsent Masons.

Masterson continues, “Automotive manufacturers are aware that regulatory scrutiny is only going to get more intense, so they’ll be looking at how they can further limit the number of vehicles which are found to pose a risk to consumers. A lot of recalls arise due to problems with  low value components of which inevitably there are very many in a typical vehicle. We can expect to see an increased focus on quality assurance especially in relation to sub-assembly suppliers as manufacturers look for better visibility over the quality and traceability of their sub-components.”

Masterson concludes, “Longer term, the move towards the development of connected cars with ever-more sophisticated components and technological complexity could yet make this process even more difficult. It will be a challenge but one the industry is well-placed to meet.”