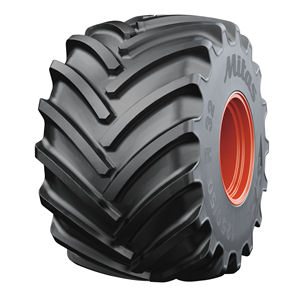 Weighing-in at 555 kilogrammes, the size 1250/50 R 32 SFT tyre for large agricultural machinery is the largest product in the Mitas portfolio, and the US-made behemoth will be launched in the UK next month. Visitors to LAMMA 2015 at the East of England Showground on 21 and 22 January will be amongst the first in the country to see the new, 2.02 metre diameter tyre.

The 1250/50 R 32 SFT is produced in Mitas’ Charles City plant in Iowa, within the largest curing press in operation at any Mitas factory. The tyre contains 76.5 metres of cord, has a volume of 2.3 cubic metres and is capable of carrying loads of up to 16 tonnes (10 km/h cyclic). Mitas says it has introduced its SFT technology in this size in order to maintain its position as a leading supplier of combine tyres in Europe.

“Although this new Mitas tyre will not be sold in large volumes, it fulfils an increasing requirement from our customers who manufacture or operate increasing large machinery and need to spread the weight over a larger footprint,” says Jon Ward, managing director of Mitas Tyres Ltd. “We have already received a number of enquiries from companies using spreaders, trailers and tankers. The new tyre will also benefit contractors who operate Terra-Gator or similar machines where the need to minimise ground pressure is vital.”

Providing operators with the flexibility of variable inflation pressures, the Mitas SFT concept enables optimal performance to be achieved for every application, in every operational situation. The SFT concept will hold strong appeal for farmers, says Mitas, because of its gentle ground-handling, a characteristic that is becoming ever more important as the size and weight of agricultural machinery increases, while the need to minimise its impact on the soil structure takes greater prominence.