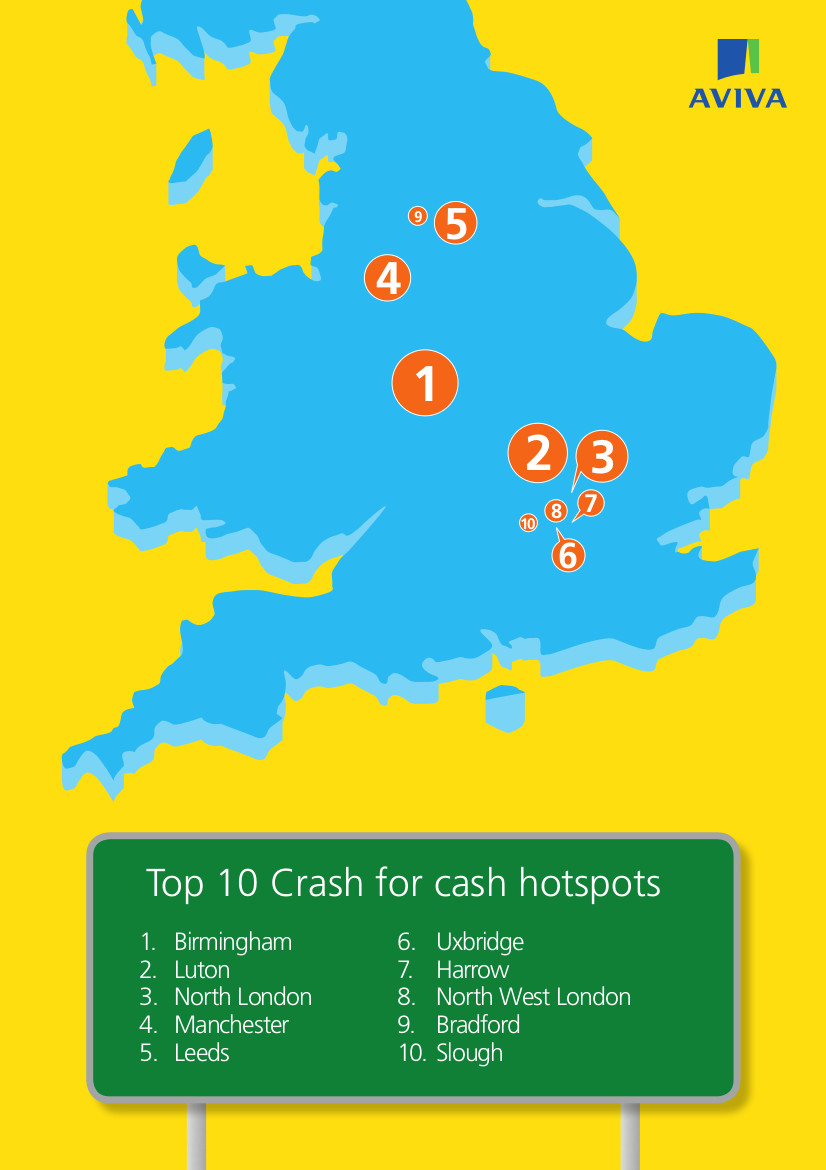 Crash for cash – road traffic accidents deliberately caused in order to claim whiplash compensation – is now at the highest level ever detected by Aviva, the UK’s largest insurer.

Organised gangs are at the heart of the increase in the number of these induced accidents. So far this year, Aviva has seen a 21 per cent increase in organised fraud over 2013, contributing to the record number of fraudulent motor claims. More than 50 per cent of Aviva’s motor injury claims fraud is now organised in nature and the insurer now has over 6,500 suspicious injury claims linked to known fraud rings.

The latest view from Aviva of where organised gangs induce motor accidents reveals Birmingham and Greater London are the UK’s crash for cash hotspots. In the past, the northwest – particularly Manchester – has been the focal point for crash for cash activity. However, a number of successful operations and prosecutions in that area, as well as the expansion of organised fraud in other areas of the UK, is changing that picture.

To combat the rapid growth of crash for cash, Aviva is asking the Government to look at treating minor whiplash injuries with rehabilitation, instead of cash compensation. Aviva believes this would remove the motivation for fraudsters to deliberately cause accidents in order to make a claim, as well as protect innocent motorists and help keep premiums low for customers.

How to minimise the risk of being targeted by the cash for crash fraudsters:

What to do if you are in an accident and are suspicious it may be fraudulent:

Tom Gardiner, head of claims fraud for Aviva’s UK and Ireland General Insurance business, said, “Crash for cash is not just a financial problem – it’s a serious social problem. No other form of insurance fraud puts the public at risk of serious injury.

“Imagine you’re driving the kids to school when the car in front slams on their brakes without warning, leaving you no chance of avoiding a crash. These deliberate accidents are on the increase, putting innocent motorists at risk simply so the driver in front can get cash compensation. Last year Aviva found these accidents increased by 51 per cent, and they are continuing to grow. Part of the growth is coming as fraudsters are moving away from a small number of “hot spot” locations to a much wider footprint.

“The fight against fraud begins with an effective deterrent. In addition to more prosecutions and stronger sentences, we need to remove the financial incentive for minor whiplash claims like those claimed for by serial crash for cash fraudsters. We are asking the Government to consider compensating short-term whiplash with rehabilitation, instead of cash. Would crash for cash exist if there was no money in it? We don’t think so.”

Crash for cash not only threatens motorists’ safety, but also their pockets, adding an estimated £400 million to the cost of car insurance – or around £14 on every motor insurance premium.  Fraudulent motor claims in Birmingham postcodes detected by Aviva totalled more than £4.7m through August this year. This can influence premiums in the Birmingham area, and is one of the reasons why Aviva is committed to fighting this reckless form of fraud – to reduce customer premiums.

Gardiner continued, “We are urging motorists to remain alert to crash for cash, especially in those areas where we know this is a problem. As our data shows, innocent motorists are put at an increasing risk from professional fraudsters which is why we’ve published advice to motorists to help them prevent getting caught up in this dangerous act.”