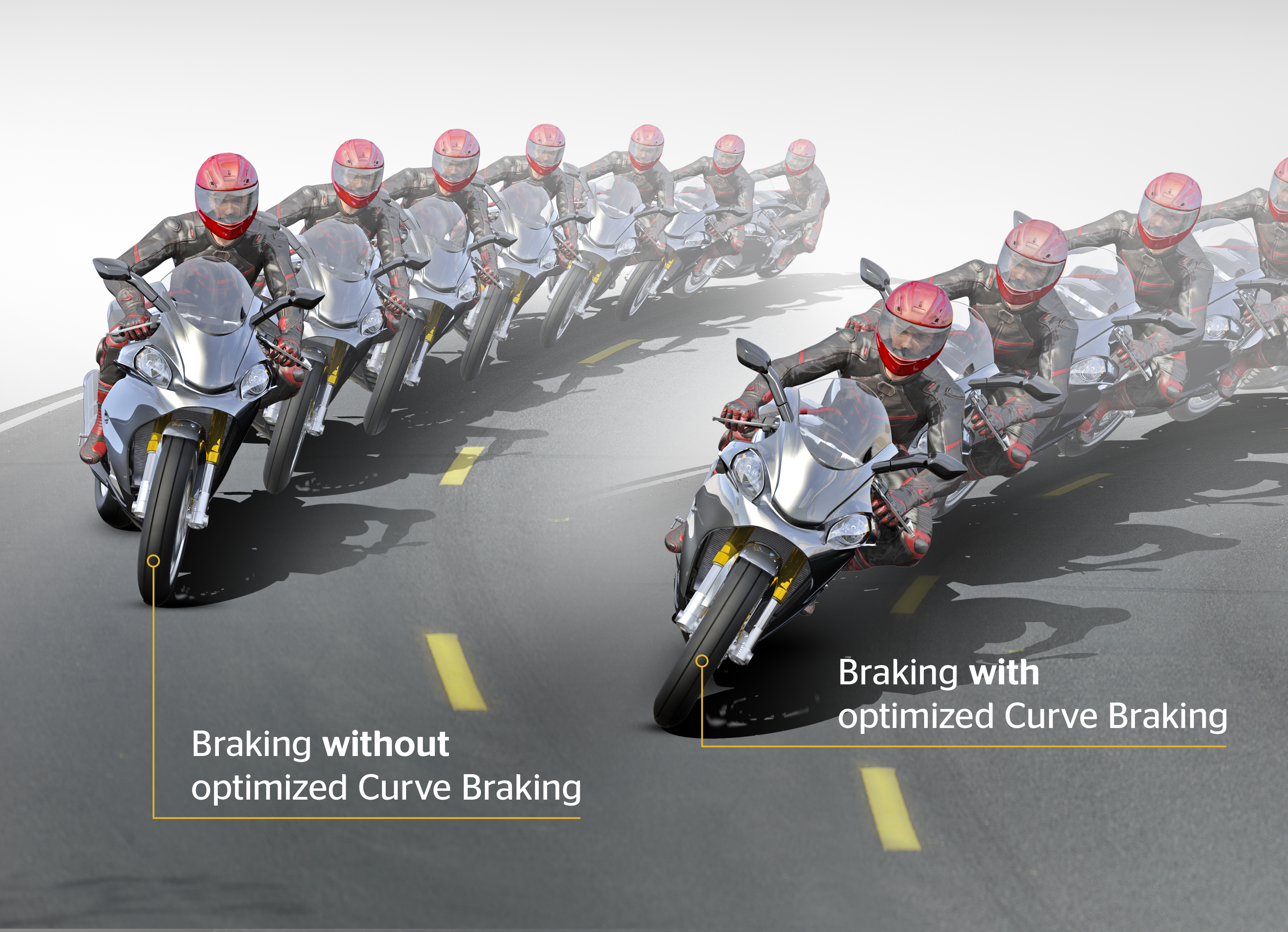 The BMW S 1000 XR, launched at the 2014 EICMA show in Italy this month, is the first series model to receive Continental’s newly-enhanced Motorcycle Integral Brake (MIB) system. The latest version of MIB builds on the motorcycle anti-lock braking system Continental has manufactured for more than a decade by adding an optimised curve braking function that facilitates safer braking in curves.

“Thanks to optimised curve braking, braking in curves is more stable and therefore more predictable. The danger of having an accident in a curve is reduced and safety increased,” shares Ronan Le Roy, head of the motorcycle business within the Vehicle Dynamics business unit, which is part of the company’s Chassis & Safety division. The function will go into series production in the BMW S 1000 XR motorcycle in early summer 2015.

Until now, ABS for motorcycles was designed to maintain stability during straight-line braking, and brakes needed to be applied carefully in curves in order to avoid a loss of balance and sliding. “The system takes account of the fact that a motorcycle banks in curves. The ABS kicks in more gradually, modulating braking pressure more smoothly to improve handling in curves”, explains Lothar Kienle, head of Development Motorcycle in the Vehicle Dynamics business unit. The Motorcycle Integral Brake system ensures the optimal proportion of brake pressure is applied to both the front and rear wheels, resulting in greater overall stability. The motorcycle translates a rider’s braking intention without a radical shift in weight.

The interaction between numerous sensorics and high-capacity algorithms in a sensorbox is decisive for optimised curve braking. The ABS adapts as a function of how much a rider leans into a curve, depending on the situation. The sensor cluster provides signals on roll and pitch rates plus lateral acceleration to help determine the angle at which a rider is leaning and checks the data around one hundred times per second. As the rider leans more into a curve, the system further limits the speed of the brake-pressure increase at the beginning of braking. The resultant braking pressure accumulates in a more gradual fashion. In addition, the ABS doses modulation more gently.

The system allows for a series of other safety functions that benefit both manufacturers and riders: articularly sensitive lift-off detection for the rear wheel for optimum deceleration and stability (RLP); electronic traction (TCS) steps in whenever a motorcycle threatens to get out of control due to excess speed, extreme banking or too much slip. Motor management and/or braking reins in power so that a motorcycle can regain stability; and wheelie control regulates engine torque to prevent the front wheel from lifting off during acceleration.

According to Le Roy, the safety benefit of ABS being widely adopted on motorcycles is substantial: “Studies have shown that equipping motorcycles with ABS could reduce accidents by 20 to 30 per cent. Universal use of ABS in motorcycles and scooters could greatly reduce the number of serious injuries and accidental deaths.”

The European Union has already decreed the mandatory fitment of ABS on all newly-developed motorcycle models with an engine displacement greater than 125cc as of 1 January 2016, and this requirement will be extended to any new motorcycle sold in the EU from 1 January 2017. Continental says it supports manufacturers and riders with an array of solutions for every class of vehicle. Its line-up covers a range of solutions from one-channel ABS for scooters and light motorcycles to the Motorcycle Integral Brake system, which in addition to optimised curved braking also offers features such as sport and off-road ABS, and Motorcycle Hold & Go.