A.C. Milan players dribble from the rooftops with Toyo Tire 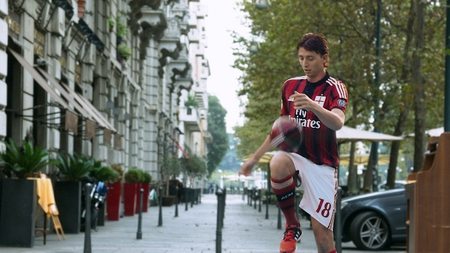 Four players from Italian football club A.C. Milan race against an Audi R8 through the team’s hometown in a new video released by Japanese tyre maker Toyo Tire & Rubber. The two-minute promotional video features Riccardo Montolivo, Jérémy Ménez, Adil Rami and Keisuke Honda from A.C. Milan competing against the enthusiastically-driven R8 in a city alley race, and Toyo promises a ‘surprise ending’ when the Stig-like character behind the wheel of the Audi finally removes his helmet.

The four footballers dribble and pass a football to each other throughout the streets and rooftops of Milan with masterful skill. The Audi R8, equipped with Toyo Proxes T1 Sport high-performance tyres, drives through the same streets with a football buckled in at shotgun. It heads for the same goal as the footballers. Who will win? The people of Milan hold their collective breath.

The video is aimed not only at Milanisti and auto fans, but also the general public. Dialogue is kept to a bare minimum, and the Toyo says “fun can be experienced in full even if the audience does not understand a word of Italian.” The tyre maker is one of A.C. Milan’s premium sponsors, and shares it “took great pleasure in commissioning this unique video to simultaneously showcase the amazing performances of both its top quality tyre products and A.C. Milan’s footballers.”

The video embodies the company’s “belief in constantly providing fresh surprises to its audience,” spokesperson Haruhiko Kitagawa comments, adding, “We wanted to express how we as a tyre manufacturer can be playful and at the same time a serious competitor, just like the A.C. Milan stars. We believe the video not only achieves that, but also captures the joy and beauty of driving with high performance auto gear.”