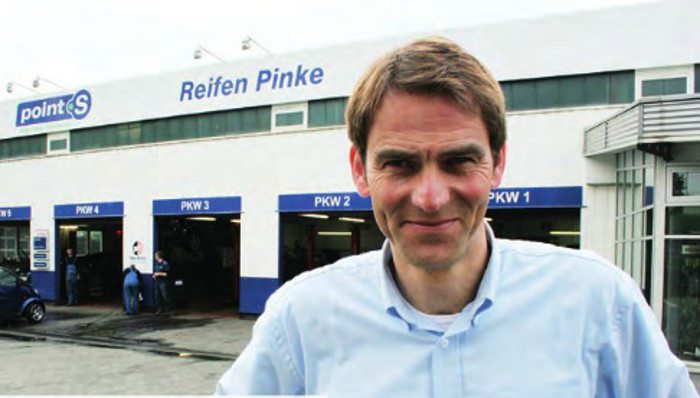 For Reifen Pinke managing director Jörg Pinke, operating a pre-cure retreading facility is “an important primary aspect of our service”

Own sales channel important for business success in two ways

Small and medium-size truck tyre suppliers are well aware that a complete portfolio must also include corresponding retreading products. These days, for either economic or environmental reasons, a large percentage of customers within the transport sector expect further use from their tyre casings following the first tyre life. As shown during a visit to Reifen Pinke in Germany, tyre dealers with their own retreading production can particularly profit from this.

Reifen Pinke is a well-established tyre dealer based in North-Rhine-Westphalia. The company was founded in 1952 and today the family business is in the third generation, led by Jörg Pinke, and in addition to its three point S outlets the company has operated its own pre-cure retreading operation at its headquarters site in Brilon for more than 30 years. “Retreading is an important primary aspect of our service,” managing director Jörg Pinke tells Tyres & Accessories. In other words, Pinke’s end customers – logistics operators and fleet operators within an 80 kilometre radius – demand a range of products from their new tyre supplier that meets all their needs. As a result, retreading and its “considerable share of the entire truck tyre business” serves as a significant means of customer retention.

Of course Reifen Pinke could simply purchase these retreads, as enough retreaders operate within the region. But the advantages having your own retreading capability are clear to see: Reifen Pinke can respond to customer requirements with absolute flexibility without needing to rely upon input from an external retreader. This particularly applies and is advantageous in regards to logistics when considering that at least 30 per cent of the tyres Pinke retreads are on customer own casings. This means a customer that purchases its new tyres from Pinke will give them up for retreading at Pinke and not somewhere else – a location where it may be tempted to also buy its new tyres in future.

Likewise, the long-established company profit from retreading via its own network of retail branches. This is – as is the case for all small and medium-size retreaders – a primary sales channel for marketing a large portion of its own production. The trend shows that this self-controlled sales channel continues to grow in significance, despite a shift in the overall market from independent retreaders to companies operated by the tyre majors. Alongside Michelin, whose new tyres enjoy above average sales at Reifen Pinke and are accompanied by Remix retreads (Reifen Pinke is a Michelin certified specialist), Pinke’s own pre-cure retreads round out the company’s portfolio nicely. At least half of this own production is purchased by customers through Pinke’s three outlets, a figure that shows the network’s significance as a sales channel. The fact that the other half of production comes to market through standard reselling reflects positively on the quality of Pinke retreads, the managing director comments.

Sales and distribution over its own retail network is also important for Pinke when it comes to acquiring retreadable casings. As already mentioned, a third of all retreading in Brilon is performed using customer own casings, and this means that for the remaining two thirds Jörg Pinke needs to rely upon casings that come from within the company’s own system, specifically those from transporters and fleet operators that purchase their new tyres through the three Pinke outlets and offer the retreader first right of refusal on their casings. As closed and tyre major-dominated life-cycle systems are a growing trend within the tyre market, it is becoming increasingly important to find a suitable solution for what has more or less become a constant and strongly pronounced casing problem. As a virtually “self sufficient” operator, Jörg Pinke only has to rely upon casing dealers and their wares for a small portion of his requirements. These companies play more a role for the point S partner when it requires high-quality casings that the tyre major-operated retreaders also obtain from casing dealers in order to cater for their fleet business requirements. “For smaller retreaders such as us it is increasingly difficult to obtain good, retreadable 1A casings on the open market,” shares Jörg Pinke. One key reason for this is that some of the supply that previously met demand in Germany, where Pinke operates, and throughout Western Europe is now sent eastwards, where cost factors make it attractive for pan European logistics operators set up their bases.

A further advantage Pinke enjoys from performing its own retreading that shouldn’t be underestimated is that its retreading process and the equipment used are fully developed. A new buffing machine or a new autoclave may aid in increasing production efficiency, but they also cost a lot of money without appreciably improving the end product, share Peter Maresch and Peter Frost during a tour of the Pinke retreading facility. Both men have worked in the production side of Pinke’s business for a number of years now and are very satisfied with the equipment used in the retreading process. At the end of the day, the quality of a retread is determined by the level of craftsmanship applied and the materials used. Reifen Pinke’s utilisation, virtually without exception, of materials from market leaders such as Kraiburg and Marangoni underscores this commitment to quality.

It also goes without saying that the pre-cure process can’t be beaten when it comes to flexibility and cost efficiency. No expensive presses, moulds or extruders are required. And when needed the manufacturing process can continue without the burdensome process of stopping to swap over moulds. Jörg Pinke admits to harbouring a general interest in working together on retreading with a system provider, but this poses the question of whether such a decision is economically viable due to the level of investment that would be required, for example in shearographic equipment. And as the established company plans for the long term and Jörg Pinke already thinks about the day when the fourth generation eventually takes over the reins, he doesn’t want to make such a decision lightly.

The three production workers at Reifen Pinke typically produce between 5,000 and 7,000 tyres a year and the facility’s autoclave can handle up to ten tyres at a time. The retreading programme includes the popular 22.5 truck tyre and light truck tyres.