You are here: Home1 / News2 / Product News3 / Winter tyre growth in cyclical decline, but UK a market for all season...

Winter tyre growth in cyclical decline, but UK a market for all seasons 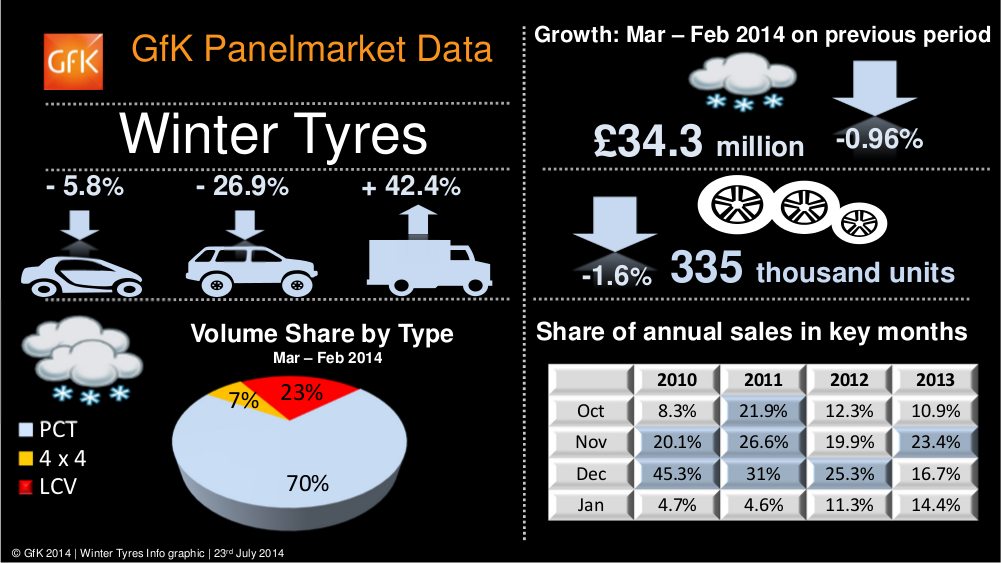 In Tyres & Accessories’ August 2013 Winter Tyre feature, we discussed the UK tyre industry’s continued deliberate steps towards the development of a winter tyre market, and the possibility offered by all-season tyres (which we’ll come to later). While the figures showed that sales of specialised products represent a much greater share of the market than you might have thought in the winter months, the correlative spikes in this figure remain confined to the months in which the weather is coldest. The latest infographic from GfK Retail and Technology on winter tyres, displayed on this page, goes further towards showing that this trend is prevalent even within the October-January period where winter tyre sales are most popular.

In the section titled “Share of annual sales in key months” the highlighted months indicate where the winter tyre share of the entire market rose above one-fifth. The harsher winters of 2010 and 2011 have both the month in which this share was greatest (45.3 per cent in December 2010, coinciding with a lengthy period of snow) and an extended period of three months, where the share of winter tyre sales grew from around a fifth to nearly a third (October-December 2011). As we can see from the remainder of this chart, the monthly shares since then have dropped back down, with two outlier months – December 2012 and November 2013 – where colder weather persuaded consumers back to the retailer to invest in winter products.

We might speculate on the main reason for this apparently cyclical consumer behaviour being the inherent complacency of our market’s behaviour, in light of our temperate climate. 2011 appears to have performed consistently well as UK motorists prepared for winter conditions that didn’t quite hit the severe heights of November-December 2010, after which a little amnesia kicked in, reducing sales further.

This interpretation appears particularly appropriate taken alongside the negative growth (down nearly a full percentage point in value, and down 1.6 per cent in unit volume) of winter tyre sales in the period March 2013 – February 2014; the UK consumer is settling into a period of milder winters until the next cold snap comes along, even though this leaves the country particularly vulnerable, with no market stability to ensure winter tyre supply when it is most needed. Of course, what this doesn’t show is the replacement cycle. It is possible that the winter market may have hung on to more of the growth in 2010-2011 in the long run, as the consumers who purchased tyres in those years come around to replacing them (or not). The fact that units are down further than the economic value of the segment (£34.3 million) can partially be explained by the make-up of the UK winter tyre market. While the passenger car winter tyre segment is down 5.8 per cent, and the SUV/4×4 segment down over a quarter in the March-February 2014 period, the light commercial vehicle winter tyre market has risen a whopping 42.4 per cent. The value of these tyres often outstrips the smaller PCR segment tyres. The SUV market’s collapse in the year up to the end of the 2013/14 winter season may be surprising, but the popularity of machines designed only for road use in this segment, and the perceived safety they offer already, may have affected the traction of winter tyre attractiveness to this segment of the market.

One subject T&A covered at length last year was the potential of the all-season market, most notably expounded by Bridgestone in the UK. While we reached an estimate that all-season products account for around two per cent of the total market in 2012/13, it seems we may have been too conservative. GfK automotive account director Kevin Glynn explains that all-season products are normally grouped with summer tyres, but separating them for the first time this year, Glynn observes that the all-season share is “around 2.4 per cent of the market”.

This share is “over 21 per cent up on the last 12 months,” Glynn continues, with winter only 1.7 per cent. That all-season figure looks even better when we take the March 2013 – February 2014 period, in which “growth is just under 27 per cent”. Once again, those offering a compelling third way appear to be capitalising on the UK’s temperate outlook.