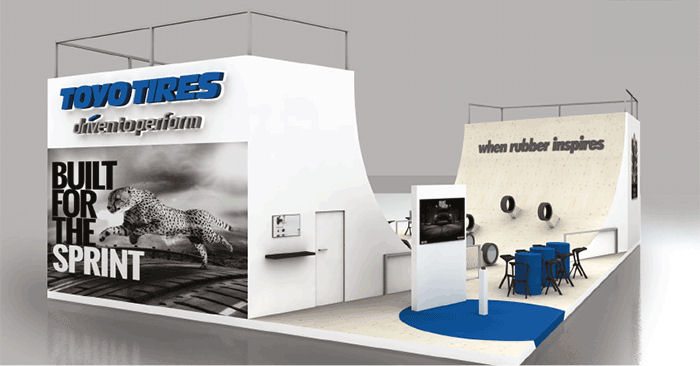 Toyo Tire Europe says it will participate in Reifen 2014 with a radical new concept booth designed to showcase the company’s more focused, purposeful approach. The new booth takes the theme of an urban skatepark with a large half pipe dominating the design. The concept is intended to reflect the driven nature of skaters. The Essen show is the first outing for Toyo’s new exhibition presence, however the company says we can also expect to see the booth at consumer events during the coming year.

The new exhibition booth, Stand 3C30 in Hall 3.0, will host the relaunch of all Toyo Tires’ European websites. Their introduction will coincide with the opening day of Reifen 2014. Toyo will also use the show as a platform for explaining in greater detail its recently announced sponsorship of Italian football club AC Milan and the expected benefits for Toyo’s global brand image. Examples of the company’s new wild animal-based advertising campaign will also feature prominently on the stand. Toyo says its new advertisement designs represent another pillar of its integrated approach to the brand.