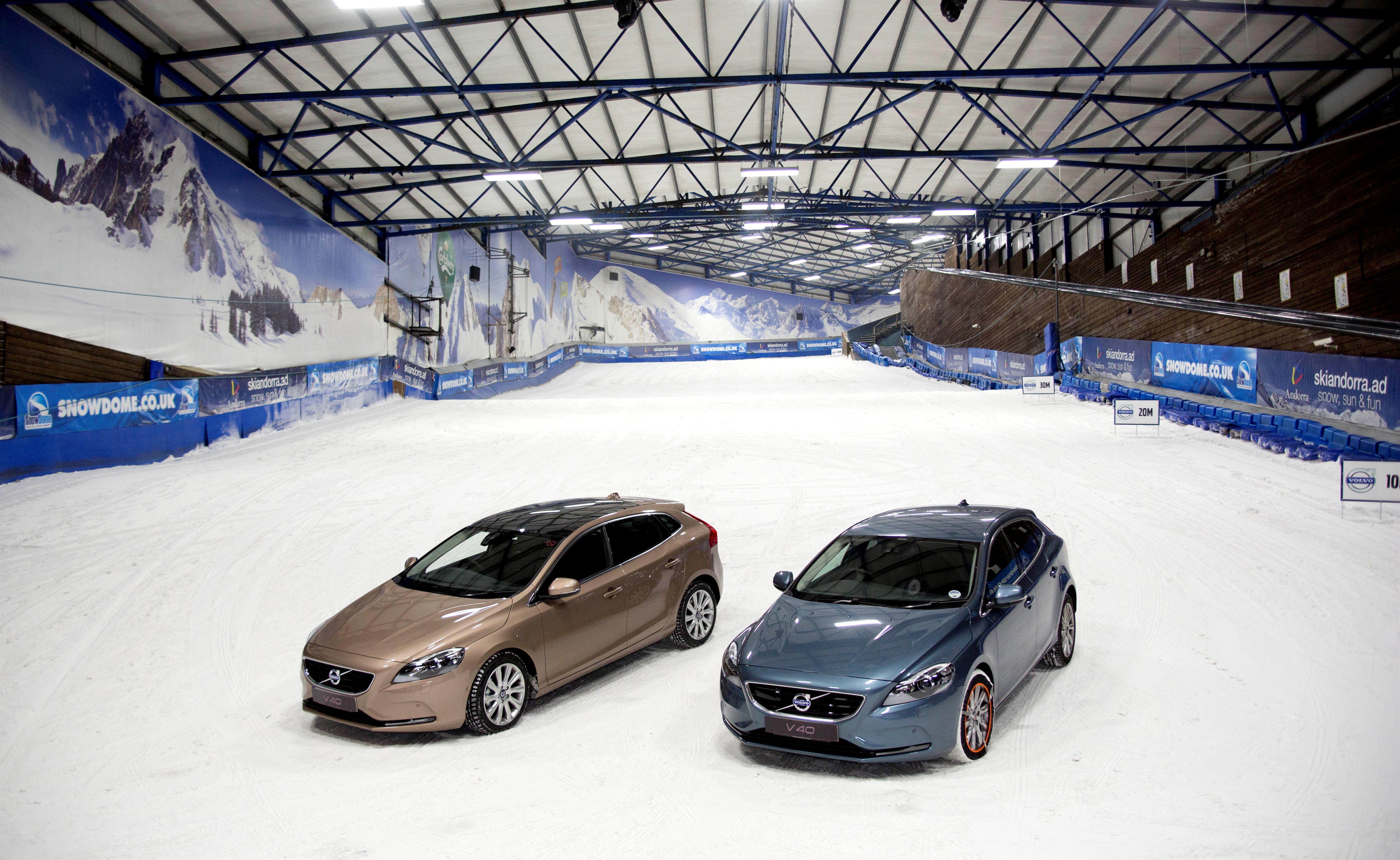 As temperatures plummet and experts predict a harsh winter for the UK, Volvo Car UK invited ‘Made In Chelsea’ star and Volvo V40 driver Louise Thompson to demonstrate the effectiveness of winter tyres for driving in snow. Two identical Volvo V40 D2 hatchbacks – one on standard tyres and another on winter tyres – were ready to meet Louise at the Tamworth Snowdome, an indoor ski slope, where she attempted to drive each one up the slope to the summit.

The test was later repeated using snow socks – a quick-fix, temporary alternative to a full set of winter tyres – to see if they could also improve on the performance of standard tyres. And the results were enough to dispel any remaining doubts about the advantages of fitting winter tyres. During the test, Louise struggled to hit the five-metre mark on standard rubber but comfortably cruised past the 100-metre marker and continued on towards the summit as soon as she switched into the car fitted with winter tyres.

“I’m amazed that it makes such a difference,” she said. “One of the cars has amazing grip and can get all the way to the top, while the other can barely move, so if you’re going to be driving in the snow, I definitely think it’s important to have winter tyres.”

Millions of motorists are expected to find themselves driving in treacherous winter conditions in the coming weeks, and investing in a set of winter wheels and tyres could help them avoid being stranded in the snow.

Winter tyres are at their most effective when temperatures drop below seven degrees. With the Met Office having recorded average temperatures for winter 2012 of just 3.3 degrees, winter tyres could have a huge role to play in reducing accidents and enhancing road safety.

They use a softer rubber compound than standard tyres which helps them stay more flexible in cold weather. As a result, they can grip the road surface far more effectively, retaining stability and traction, and boosting driver confidence that the car is able to cope with the conditions.

To put it into numbers, if a car is travelling at just 19mph on ice, winter tyres can reduce the average braking distance from 68 metres to 57 metres, while at 30mph on snow the figure falls from 43 metres to 35 metres.

A second test saw fabric snow socks fitted over the standard tyres in just a couple of minutes. This simple, low-cost upgrade transformed the standard tyres’ performance and enabled the V40 to cruise up the slope with relative ease.

Both winter tyres and snow socks could help reduce the 5,000 accidents the Department for Transport says were caused by treacherous winter weather in 2012.

Nick Connor, Volvo Car UK managing director said: “We wanted to demonstrate, in the most severe conditions possible, the effectiveness of having winter tyres or snow socks fitted to your car. There’s definitely a degree of scepticism out there about how useful they can be, but this test dispels the myths once and for all.

“Winter tyres and snow socks are available nationwide from our dealerships and we hope this has given motorists reason to believe they’re a worthwhile investment,” he added.

While winter tyres are mandatory in Austria, Switzerland and Germany, fewer than 5 per cent of new tyres sold in the UK each year are winter tyres.