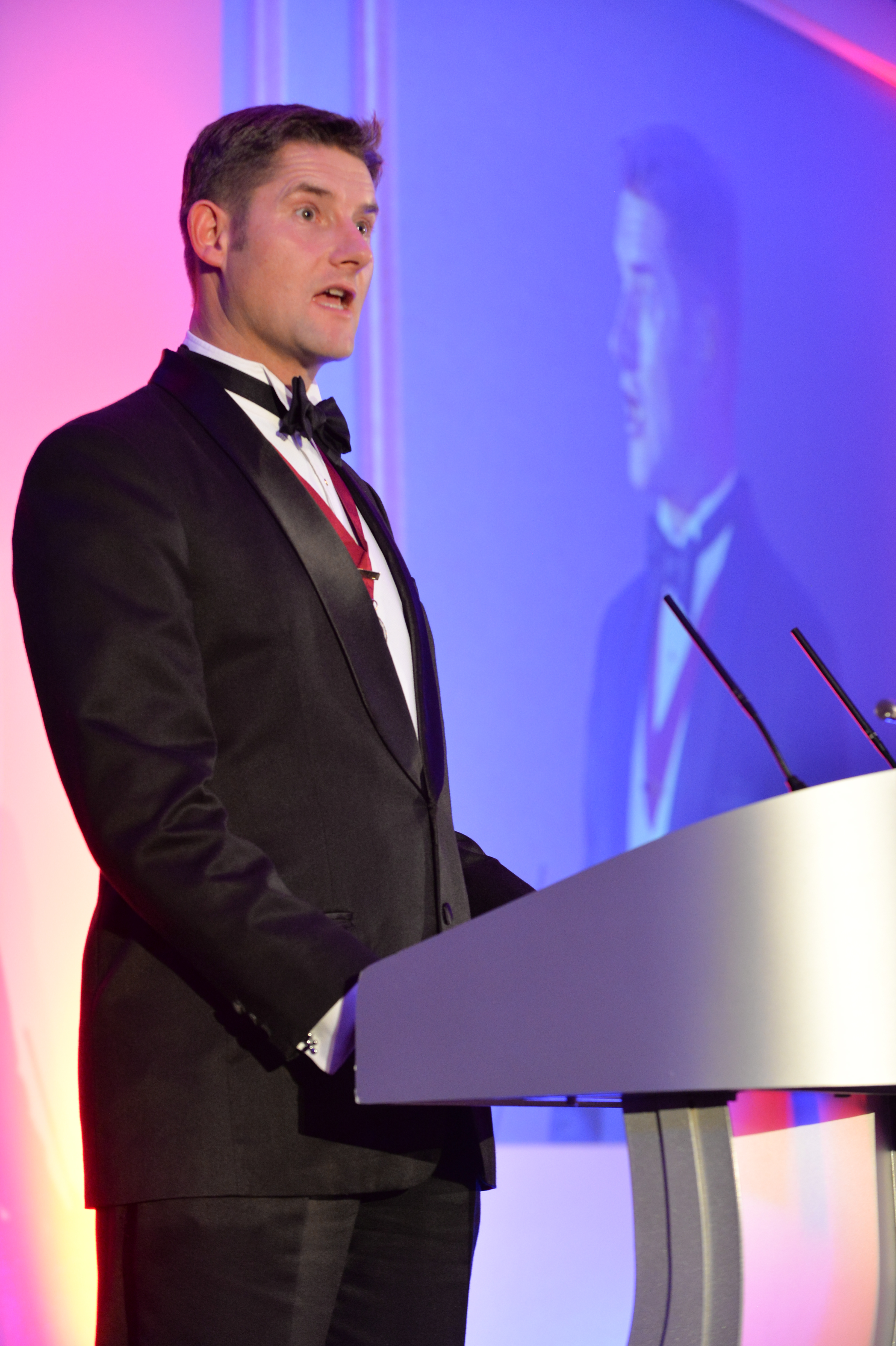 Current NTDA chairman Stephen Callow giving his last speech in the role, before Kwik-Fit's Roger Griggs takes over in the first quarter of next year

Kwik-Fit’s Roger Griggs to be next chairman

As we have seen, this year the TAFF awards provided a number of new winners. And the annual speech revealed some interesting details of what is on the horizon for the NTDA in particular and the tyre industry in general. With both points in mind, Tyres & Accessories has produced this comprehensive review of both the award winners and forthcoming NTDA news.

Stephen Callow’s annual address marked the final speech of his tenure. Indeed one of the first subjects was the announcement of Kwik-Fit communications director Roger Griggs as the next chairman. According to the current incumbent, Griggs will take over in March.

From here the speech covered a range of topics including what the association is doing to keep up with legislative changes affecting the tyre business, the results of the recent NTDA/Lanxess research into retail views on tyre labelling and the association’s support for the work of TyreSafe. Although there sometimes appears to be a never-ending stream of new legislation, the focus of the NTDA’s attention in recent months has been the first year of tyre labelling. As a result the association has produced survey data showing relatively low levels of demand for labelling data from consumers. The NTDA also called on government to do more to make the most of the labelling opportunity (see page 36 for more on tyre labelling).

For its part the NTDA is demonstrating its ability to be proactive in its action against illegal part worn tyres. Not satisfied with the variable levels of enforcement across the country, the NTDA has committed to part funding the important work of trading standards offices, beginning with a four-figure sum and continuing with funds generated by a levy.

However as important as all this undoubtedly is, the presentation of the Tyre & Fast Fit Awards has become a highlight of the NTDA Annual Dinner and this year’s event was no exception. Once again the Awards were sponsored by Lanxess UK, whose MD Kim O’Connor joined NTDA Chairman Stephen Callow in announcing the winners and presenting the coveted trophies. After the event, Tyres & Accessories sought the reactions of the winning companies.

The first award to be presented was the Environment Award and this proved to be something of a surprise as, for the first time, it was won by a tyre manufacturer rather than a company from the recycling sector. The manufacturer was Dunlop, who is celebrating 125 years in business, and the award was given largely for the company’s Dunlop Sport BluResponse tyre.

The TAFF award is added to the list of accolades the tyre has won since its launch in January, reinforcing not only the performance of the tyre but also its green credentials. This latest achievement follows on from the tyre being one of the 18 finalists in the annual AutoBild Green Steering Wheel competition, in which it was the only tyre.

However, it is not only on the road that the tyre has been showcasing its eco-capabilities, but on the race track also. Dunlop has been working in partnership with the GreenGT team to develop tyres for the world’s first hydrogen fuel cell powered race car, the revolutionary GreenGT H2. The car, which features electric powertrain technology, completed its initial tests on racing tyres inspired by Dunlop’s Sport BluResponse tyres.

“We are delighted to win this award – for 125 years Dunlop has been at the cutting edge of tyre innovation – whether it be on the road or the race track,” Andrew Marfleet, Dunlop brand manager UK said. “It is great to get recognition from the industry for the fantastic product innovation work we do.”

The other finalists in this category were Kingpin Tyres, Murfitts Industries, Sapphire Energy Recovery and Vellco tyre Control.

Next up was the Tyre Manufacturer of the Year, where some familiar names were joined by a first-time finalist. So it was that Apollo Vredestein found itself competing with Bridgestone UK, Continental, Goodyear Dunlop and Michelin. In the end, it was a previous winner who won out, with the award going to Michelin.

Malcolm Scovell, Commercial Director at Michelin, said: “Everyone at Michelin is really delighted to receive this award. We’re especially pleased that Michelin’s new products and continuous innovation have been recognised by our customers and distributors. Our mission is to manufacture tyres with exceptional qualities across a range of criteria including safety, longevity and fuel efficiency – we call it Michelin Total Performance. This TAFF award shows we are achieving those aims”.

The Industry Advertising Campaign award is sponsored by Tyres & Accessories and, as in previous years, the standard this year was very high. The winner was Infinity Tyres for their eye-catching ‘Not all tyres are created equal’ press campaign, featuring tyres transposed on to iconic national symbols. The adverts differ from country to country; for example, in the UK the image is the London Eye, in India the Taj Mahal and so on.

Harjeev Kandhari, Executive Director of the Al Dobowi Group, told T&A: “On behalf of the entire team at Infinity Europe, we are delighted and honoured to receive this award. Our intention has always been to disprove the rule that new entry brands cannot break through and promote their benefits against the marketing strengths of the more established major tyre companies. In this respect we hope that our first TAFF award inspires others in the tyre industry to raise their game and understand that with a healthy combination of inspiration and perspiration, anything is possible. We also take real delight in designing and developing our campaign themes and we hope that our ambitious efforts are both informative and recognisable to the U.K. tyre trade.

“Of course, this TAFF award would also not be possible without the solid support of our distribution partner, Bond International, and its many hundreds of local dealers who have taken Infinity to their hearts. We are particularly proud of the progress of the Infinity brand across the U.K. market and we look forward to developing more eye-catching campaigns in years to come – not only in passenger tyres, but also in our fast-expanding range of truck, agricultural and OTR product ranges”.

In winning the Advertising award, Infinity beat off tough competition from Dunlop, Goodyear, Michelin and Pirelli.

The finalists for the Tyre & Aftermarket Equipment Supplier of the Year award included some familiar names, most of who had been victorious in previous years. The final line up consisted of Apaseal, Auto4, Autogem Concepts, Harvie Tyres and Rema Tip Top Automotive UK and it was Harvie Tyres who emerged as the winners.

Harvie Tyres said that it came with distinct pride and honour to receive the award in front of the industry’s key movers and shakers and to receive the award for the first time in a highly competitive garage consumables and equipment market made the years of effort to become an acclaimed supplier incredibly satisfying. Harvie said that the company has a team of people who take pride in its business philosophy and are always striving towards putting the customer first and supporting the trade with quality products and service support.

Sales Director Stuart John received the award on the night. Apart from the obvious delight and pride at accepting the award on behalf of the Harvie team, he was quick to acknowledge the efforts of its staff who work from its base in Lytham St Annes and its highly regarded sales technicians who support the national trade network. Stuart John stated: “Harvie over the past few years have built a team which have incredible dedication and knowledge of the industry. Combined with these skills and the desire to deliver a professional and informed service to each and every customer means that every single one of them shares in this accolade.

“In addition the incredible work at a strategic and managerial level has resulted in the compilation of one of the most complete ranges of garage consumables and equipment in the market. Big brands including Mondolfo Ferro, Prema, Kuani, PCL, Alligator, Norbar and Compac to name but a few have added real steel to a range of products which customers and competitors alike respect with high regard.”

The award for Tyre Wholesaler of the Year is always fiercely contested and the final line-up included five heavyweights of the wholesale trade; B.I.T.S., Bond International, Grouptyre, Micheldever and Stapleton’s. In the end it was Stapleton’s who came out on top, having missed out on making it a hat trick of wins last year.

The award reflects Stapleton’s philosophy of ‘working for the customer’ which encompasses all aspects of business, from holding extensive stocks to swift, reliable deliveries (Stapleton’s has its own fleet of more than 300 vehicles and a network of strategically-located storage locations). The company has also enthusiastically embraced change and innovation in its day-to-day business dealings; a good example is Stapleton’s ProfitLink online tyre ordering system, which allows customers greater flexibility in ordering tyres.

The final award differed from those above in that it is not voted for by customers and it rewards retail excellence – it is the Tyre Centre of the Year award. Retailers can nominate one centre, or one per NTDA region for larger firms, and these are mystery shopped by specialist company Encircle Marketing, under the watchful eye of the NTDA’s Aftermarket Supplier’s Group. A shortlist is then drawn up and the centres visited by mystery shoppers with specially-doctored cars. The marks are added up and the highest scorer can proudly call itself ‘Tyre Centre of the Year’.

All performed creditably throughout the whole process, but there can only be one Tyre Centre of the Year and, in 2013, that honour goes to National Tyres & Autocare, in Falkirk.