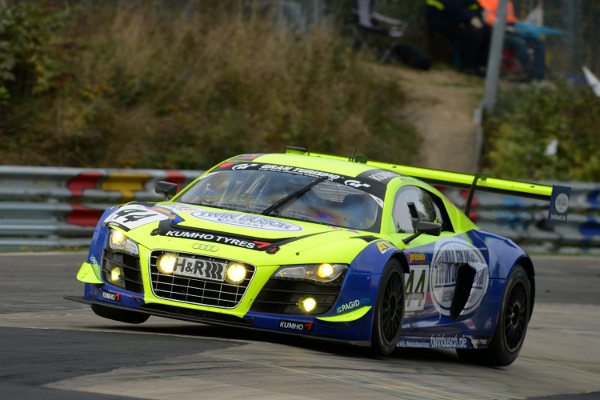 The German Busch twins won an emphatic one minute victory in 12 October’s VLN round on the Nürburgring’s Nordschleife. Their Audi R8 LMS Ultra carries the ‘Twin Busch’ livery of the brother’s successful garage equipment business and has been run on Kumho tyres throughout 2013, with increasingly rewarding results.

Already top finishers in 2013, Dennis and Marc Busch had seemed certain of a second place last time out, only for their trusty Audi to run out of fuel on the very last lap of the race. There were no such problems this time, however and, having started third on the grid for the four-hour marathon, their steed was first past the chequered flag and well clear of the pursuing Porsche 911 GT3 R and  BMW Z4 GT3; as well as the other 112 cars that undertook the event, the eighth and penultimate in this year’s championship.

Kumho’s European Motorsport manager Steve Thompson, said: “This is a fantastic result both for the team and Kumho. The Busch twins have been getting more and more out of their Audi and our tyres as the season has progressed and thoroughly deserve this win. And, while Kumho has enjoyed plenty of class victories in VLN courtesy of Peugeot and the RCZ, this is our first outright triumph in this ever popular and exciting series. We wish the brothers every success in the final round on October 26.”